• On February 28, the pests caused a spectacular scene in Nakuru when they flew over the town heading to the South-Western side of the agriculture rich county.

• The insects have continued swarming different parts of the country despite Agriculture CS Peter Munya’s assurance that the government had managed to control them. 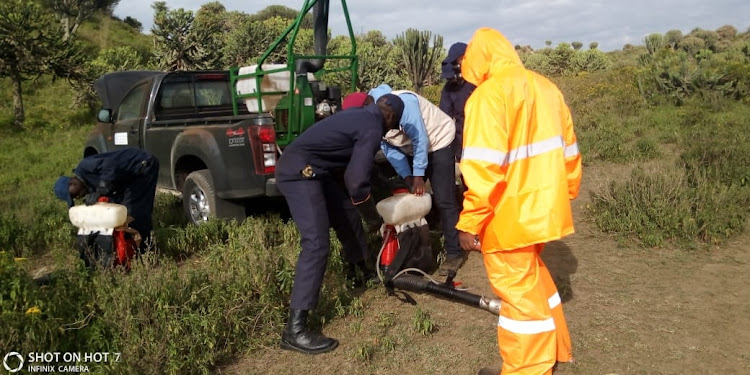 A team from the Isiolo Desert Locust Control Base in collaboration with Nakuru County Government, agriculture department have sprayed more than 140 hectares in the Arid and Semi-Arid areas of the region.

The county took the initiative after billions of desert locusts invaded the farms in Solai, Subukia, Kuresoi North, Njoro, Naivasha and Gilgil.

“The team from the Isiolo Desert Locust Control Base has been in the County to support our efforts in the management of the desert locust infestation,” she said.

She said the infestation was managed through aerial spraying, use of trained Spray Service Providers as well as vehicle mounted sprayers.

On February 28, the pests caused a spectacular scene in Nakuru when they flew over the town heading to the South-Western side of the agriculture rich county.

A week later, the locusts in their billions flew back to the direction they had come from with experts saying that farmers were lucky because they had not planted their farms.

Maina said desert locust had become a menace and major risk to food production adding that the County Government continued to build farmers’ capacity on pest and disease control and management.

“The county has to keep farmers prepared because there are numerous invasions of pests and diseases with desert locusts being a major threat to food security because they have the capacity to clear large chunks of food crop and pasture within days,” she said.

She thanked the team for their endearing support and said the county will continue to offer support in combating the invasive pest.

“The county has put in place measures including an active Nakuru Early Warning System and Community Pest and Disease Monitors who help in surveillance, monitoring and information sharing,” she said.

She added that the county had established Nakuru Locust Watch platform that would oversee surveillance and offers quick responses on current occurrences.

The first wave of desert locust entered Kenya early in 2020 through Ethiopia and Somalia invading the counties at the borders before spreading to other parts.

The insects have continued swarming different parts of the country including cold areas such as Mt Kenya Forest and Nyambene despite Agriculture Cabinet Minister, Peter Munya’s assurance that the government had managed to control them.

Munya revealed that the government has trained over 1,000 NYS personnel to help with the management operations in various places.

SAAGA supports the legal importation of avocado fruit from Tanzania.