Rice farmers in Kirinyaga county will double their production when Thiba Dam is completed by December.

Boga spoke on Thursday when he toured government projects in the county alongside Petroleum PS Andrew Kamau and Alfred Cheruiyot (Post Training and Skills).

“For two months now, we have been assessing the state of projects that have been unlocked and we have been visiting sites to know their progress. From our inspection, Thiba Dam is right on track,” PS Kamau said.

Boga said the Sh8.2 billion mega dam project is 52 per cent done and the contractor on site is efficient and committed to beating the deadline. 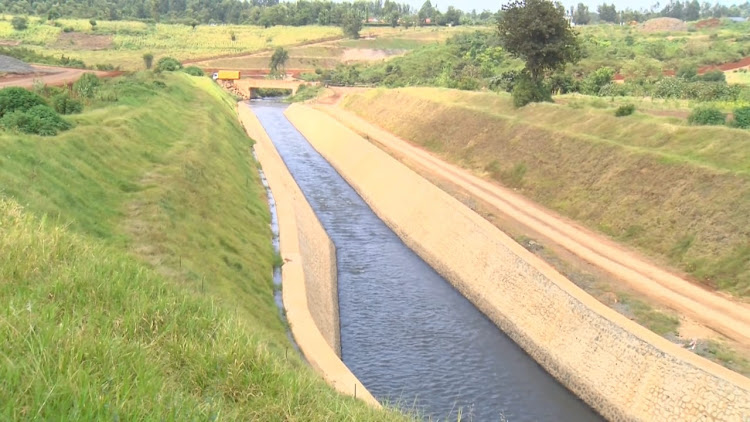 One of the components of the giant Thiba Dam project

Construction of the reservoir, which nests on a 500-acre piece of land began in early 2018 but stalled for several months in 2019 after funds dried up. The contractor suspended hundreds of workers.

Work resumed late last year after the financial problem was ironed out.

“We have experienced minor challenges from time to time, however, those are internal and are acted on very fast,” Boga said.

“We intend to introduce a second crop in the extra 10,000 acres. Not only will the rice production double, but the revenue generated from the value of the crop will also rise from Sh9 billion to about Sh20 billion.”

He said the project and expansion of the scheme will create more jobs.

Works ongoing at the Thiba dam construction site. The dam is set to be complete by December this year
Image: WANGECHI WANG’ONDU

The spill from the dam will put another 1,800 acres surrounding the facility under irrigation.

Other projects currently under construction in the county are Wang’uru Stadium, Kutus-Kerugoya water sewerage plant, Mutithi–Kagio road among others in Mwea constituency.

The government officials also toured the Wang’uru stadium which currently is 70 per cent complete. Construction work began in August last year and is set to be completed by August.

The stadium will boost sporting activities in the county and aid in the growth of Mwea town.

The facility will also host important national and regional activities.

Thiba Dam To Be Ready By End Of This Year