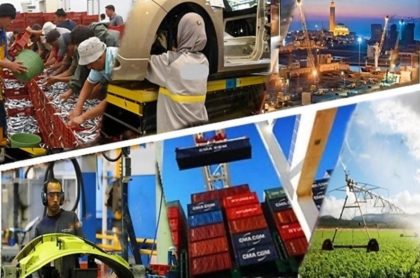 Morocco’s central bank revised downwards this year’s growth forecast to 0.7% amid rising inflationary pressures due to fallout of the war in Ukraine and as Morocco faces an unprecedented growth.
The Bank said Morocco’s cereals harvest will drop to 25 million quintals from 103 million quintals last year, amid a 57% rainfall deficit which meant that the overall agricultural output will drop by 19% this year.
The war in Ukraine has further worsened energy and foodstuff price pressures and created “acute uncertainties” for any forecast, central bank governor Abdellatif Jouahri told reporters.
Inflation is expected to surge to 4.7% in 2022, compared with 1.4% in 2021.
Due to the impact of drought and turbulences in international markets, the Moroccan bank kept its key borrowing rate unchanged at 1.5% in order to help maintain economic recovery.
Morocco’s current account deficit would widen to 5.5% due to the surge of imported goods, although Morocco is also set to reap some gains from the rise in phosphates and car industry exports.
The budget deficit however will remain at 6.3%, said Jouahri, noting that the treasury may issue an international bond when conditions permit.
He said the current context market could justify a renegotiation of a precautionary liquidity line with the IMF to mitigate external shocks.
Tourism revenue in particular would gradually recover from 34 billion dirhams in 2021 to 47 billion in 2023 and 79 billion dirhams in 2023, he said.
North Africa Post’s news desk is composed of journalists and editors, who are constantly working to provide new and accurate stories to NAP readers.

'I want to keep farming': AgrAbility program makes it possible for farmer after multiple surgeries – AgUpdate